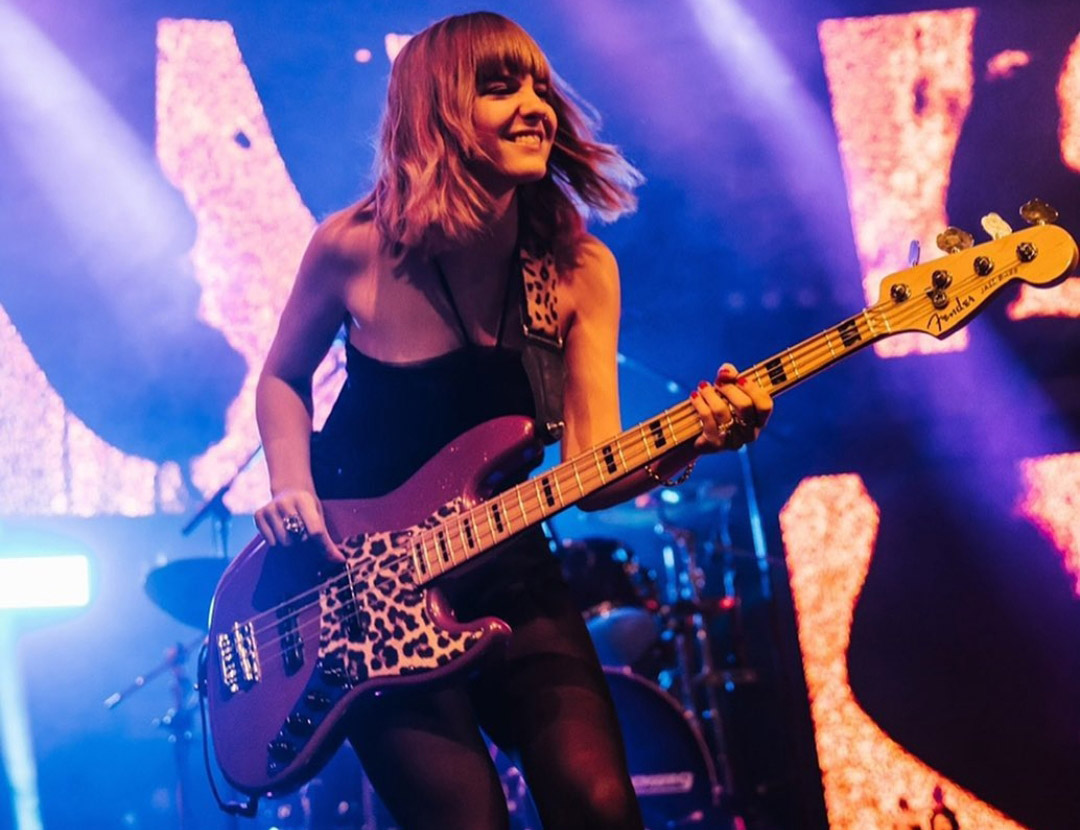 The pedalboard of Victoria De Angelis, Måneskin bassist, in 2021!

In recent years Maneskin have made a lot of talk about themselves and winning at Eurovision 2021 they succeeded globally. They are a relatively young band so their gear is still shrouded in mystery and online it is not possible to find much informations regarding the pedals used by Victoria and Thomas. Consequently, I thought I'd publish an article about their pedalboards myself as soon as I could find some information. In this specific case I have to thank one of Victoria's stories posted on Instagram, which for a moment framed her and Thomas's pedalboards during a day spent in the rehearsal room!

Victoria mainly uses a Danelectro 58 Longhorn bass although previously she used to prefer a Fender Jazz Bass and it was not uncommon to see her playing a Fender Precision as well. Those Fenders are all basses of established quality, probably the current choice is dictated by the particular sound of the Danelectro and above all by the lower weight and dimensions of the latter, being a short scale bass.

Her main amplifier is an Ampeg SVT-VR head with its Ampeg 8x10 cabinet and often on stage there is an identical backup ready to be connected in case of problems. In some smaller concerts, I noticed the use of an Ampeg SVT-CL head with Ampeg 1x15 or 4x10 speaker. 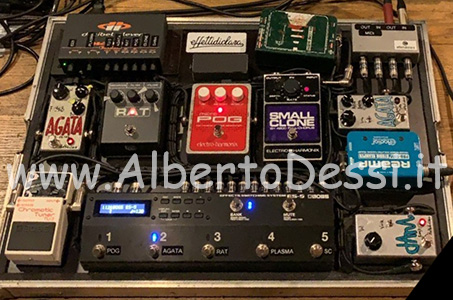 The laboratory "effettidiclara" took care of the construction and wiring of the pedals for Victoria and Thomas. It is a medium-sized pedal board, quite simple in operation, very versatile. It also contains some "studios" components such as the blue and green box which I will consider below.

Boss Chromatic Tuner TU-3: one of the most used pedals to tune the bass or guitar on stage, an improved version of the Boss TU-2.

Boss ES-5 effect switching system: the pedalboard that allows you to connect up to 5 pedals in parallel and recall them at will, even via MIDI.

Effettidiclara Agata: booster / overdrive which can provide a slight boost (or overdrive) up to a very aggressive fuzz. The characteristic of this pedal lies in its two gain stages (Before and After) which, depending on how they are mixed, generate very different overdrives, distortions and fuzzes, from crystal clear gain to very dirty distortions. In the pedalboard there are two units set at different settings, moreover the one visible at the top left is a version 2 while the one on the right is a version 3. This last pedal has probably taken the place of the Gamechanger Audio Plasma Distortion Pedal that was visible on the pedalboard during the Eurovision 2021 and of which traces can still be found in an adhesive plate attached to the side of switch number 4 of the Boss pedalboard.

ProCo Rat: one of my favorite distortions for guitar, perfect to be used also with bass thanks to the dynamism of the Filter potentiometer (tone control) that allows an excellent adjustment of the equalization.

Electro Harmonix Micro POG: great pedal for adding a low and a high octave to your sound. In Thomas' pedalboard we can see the same pedal in "nano" format.

Electro Harmonix Small Clone: one of the most used choruses ever. Economical, simple and intuitive to use, even if slightly large in size.

Effettidiclara DANA: is a clean booster that allows you to get up to +16 bB of gain and is obviously usable by both basses and guitars. It reminds the cheaper MXR Micro Amp although the Dana does provide a few more options. Probably this pedal is not connected to the Boss ES-5 but is instead switched on manually as needed, which is why it is positioned on the front of the pedalboard.

Radial ProRMP Reamp Box: it is a gear used in studio to pass an already recorded track (for example a clean bass line) back through the musician's instrumentation in order to try new settings. I think it isn't used live.

Radial JDI box: in the pedals portrayed in the image of this article there seems to be a worn Radial JDI box which has the red writing "JDI" gone. This DI gives the possibility to connect the bass output directly to a mixer without having to going through an amplifier.

Regarding the power supply, unfortunately it is not possible to read the acronym of it and personally I do not recognize it. It appears to be one with separate grounding for each output so that hum and background noise can be avoided or minimized. The Cioks power supplies (which I use) and perhaps T-Rex's should provide the same options as it.

Finally, in the image of the pedalboard, at the top right there is a custom gray box to which you can connect the bass output and the signal output directed to the amplifier. This box also has the MIDI label perhaps connected to the Boss pedal board to allow remote control or to possibly control the channels of a hypothetical midi amplifier.